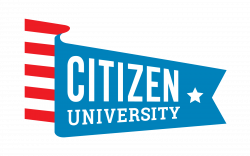 Citizen University (CU) is working to build a culture of powerful, responsible citizenship across the country. We believe that a strong democracy relies on strong citizens—that we all have the power to make change happen in civic life and the responsibility to try. Citizen University works to support this culture shift by designing programs, gatherings, rituals, and workshops that focus on civic power and civic character as the building blocks of powerful citizenship. We train and activate civic catalysts nationwide to spread the ideas and practices of powerful, responsible citizenship within their own communities.

We envision a great civic revival across our nation. Our dream is a country in which Americans are steeped in a sense of civic character, educated in the tools of civic power, and are problem-solving contributors in a self-governing community. We are working to realize the country we know is possible: a mass, multiracial democratic republic that works. A society with healthy, responsive institutions where every person feels represented and knows how to contribute. A society where we share responsibility for strengthening community and country by reckoning with our past and recommitting to each other. We believe that the American creed promises everyone freedom, equality, and justice, whether one’s family has lived on this land since time immemorial or has just arrived. We envision an America in which that promise is truly realized for everyone, because America is not America until “we the people” means all the people.

Email me jobs from Citizen University