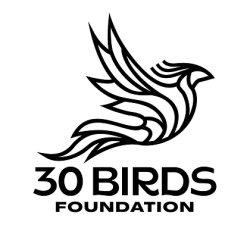 The 30 Birds Foundation is a non-profit committed to providing educational opportunities to girls in Afghanistan and securing the future of the more than 400 people, mainly schoolgirls, we have evacuated since the Taliban takeover of the country in August 2021.

The 30 Birds founding team were united by their desire to help the pupils of the Marefat High School in Kabul, a co-educational community founded by Aziz Royesh and Baroness Frances D’Souza in 2002 that taught democracy and human rights as part of its core curriculum. The 30 Birds efforts began urgently in August 2021, after Marefat Founder Aziz Royesh received multiple, credible death threats for his role in educating Hazara girls and was forced into hiding.

Following the Royesh family’s evacuation, 30 Birds turned its attention to evacuating the most vulnerable pupils and girls in the Marefat community: young female singers, musicians, athletes, and human rights activists whose very existence is inconceivable under Taliban rule. Thanks to the humanitarian support of many, including the Ministry of Foreign Affairs in Pakistan, The Princes Trust UK the governments of Canada and Ecuador, and hundreds of private individuals, the 30 Birds Foundation has helped more than 400 members of the Marefat community escape Taliban-controlled Afghanistan.

The name 30 Birds was inspired by the mystical Persian poem, The Conference of the Birds, an allegory of the human search for enlightenment. The birds set off on an arduous journey in search of their leader, supposedly the most knowledgeable of them all. In the poem, thirty birds complete the journey, only to realize that the knowledge, leadership, and courage they were seeking was already within themselves.  The success of this delicate evacuation mission derived, in large part, from the courage and leadership of the Afghan girls themselves, who played an active role in their rescue at every step of the way.  They risked their lives to help their community and to secure the right to continue their own journeys free of persecution and enslavement.

Email me jobs from 30 Birds Foundation